Out Now on Sidequest 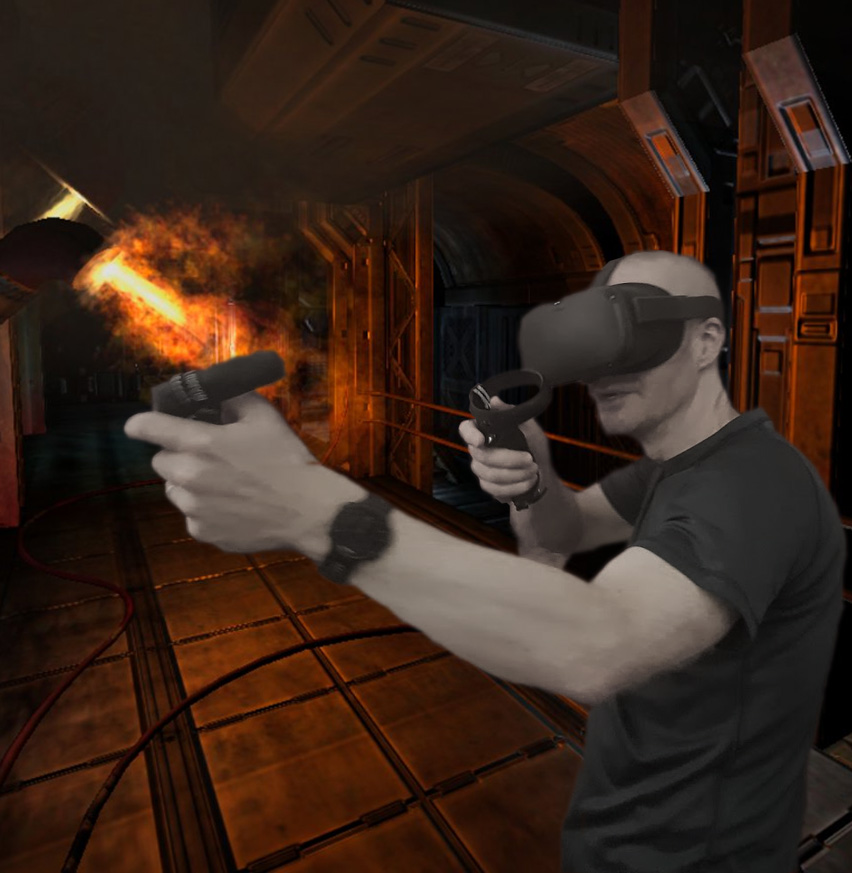 This is just an engine port and does not contain any of the original copyrighted assets. YOU WILL NEED TO LEGALLY OWN Doom 3 IF YOU WISH TO PLAY IT IN VR USING DOOM3QUEST.

Doom 3 can be purchased on Steam. Please note that this is not compatible with the Doom 3 BFG version

Doom3Quest is the result of months of dedicated work by Team Beef (Dr. Beef, BaggyG and Bummser). Enthusiasm for VR is what drives us. We also wanna thank Emile Belanger for his incredible multi-threaded android port and the Fully Possessed team for their excellent VR Features which we worked hard on to bring over to Quest. We hope you like and enjoy the result as much as we do. See you in Hell!

Latest News: Version 1.1.2 (Hotfix #2) Released - Ensure you have installed the latest via SideQuest to get the best gameplay experience

Welcome to the one and only fully wireless 6DoF implementation of the Doom 3 single player campaign in standalone VR. This is built solely for the Oculus Quest and Oculus Quest 2 VR HMD and will not run on any other device.

Doom 3 Quest is based on the excellent port from Emile Belanger (https://github.com/emileb), with multithreaded front end and backend renderering, with an updated renderer to OpenGL ES 3.0 to take advantage of MultiView to dramatically improve VR rendering performance, and many VR specific enhancements (see below).

The easiest way to install this on your Quest is using SideQuest, a Desktop app designed to simplify sideloading apps and games on Oculus Quest and Quest 2. You can see instructions on how to get Sidequest here

We recommend doing all copy / move operations via the Sidequest App. Windows File System in combination with ADB has severe caching / syncronisation issues and will often show files that no longer exist and not show files that have been moved.
Before attempting to start Doom3Quest you need to do the following:

Mac Users: Unconfirmed and Unofficial Advice from users on the community on how to get the core files: Click Here

Due to the complexity of this port and therefore the protracted development time, we have decided to release a very playable version rather than delay for longer trying to include as much as possible. There are some plans for future updates (no promises) which include the following:

Is this Doom 3 or BFG, what version should I buy?
Although there are some BFG features merged into the code, the core is very much OG Doom 3. Buy this version in preparation: Doom 3 on Steam

Will there be multiplayer?
Not at launch. There is a possibility this may come later, but is however a lot of work. The networking code changed hugely from Doom 3 to BFG. Once this is stable and released we can review our options.

Will Doom 3: Resurrection of Evil Work?
Not known for certain yet. We've taken out a few ROE specific features to get the core stable. Once it is stable we should be able add these back in and test. Things looking hopeful but not certain. Although not confirmed this will probably be the first work completed post-launch.

What about Fully Possessed Features? Is this just Fully Possessed on Quest?
Doom3Quest is based upon the core of Emile Belanger's Multi-Threaded dhewm3 Android port. On top of this Dr. Beef added full Quest VR support and also Oculus's Multi-View rendering via manipulation of in-game shaders. Subsequent to this work we have brought across some Fully Possessed and BFG features. These are unfortunately not drop in enhancements and require a large amount of work to function on a different base game (and platform). Before these were added Doom 3 was playable start to finish, but we feel there are some really good features here that will benefit Quest and Quest 2 users.
To play Doom 3 BFG on PCVR we strongly suggest the excellent Fully Possessed Mod which can be found here: Fully Possessed Mod on Github.

How does the Flashlight Work?
The flashlight has been moved from a toggled alternative to a weapon, to the off hand by default. To compensate for this advantage the flashlight has a fixed life and will flicker and eventually turn off after 30 seconds (at which point it will start charging again). You have the ability the attach the flashlight to the Off-hand / Gun / Body or Head.

I'm a terrible shot, can I cheat by having a laser sight.
You scoundrel! You can indeed have a laser pointer. This and other VR option can be found in-game -> Pause Menu -> VR Options -> General

The height of my player is incorrect!
The height of the player plus various other options can be found in-game -> Pause Menu -> VR Options -> General

I am left handed, should I resign myself to having to shoot with my weaker hand?
Absolutely Not! Left hand mode can be activated in game -> Pause Menu -> VR Options -> General. There is also an option to switch sticks.

Will mods work?
Any mod that doesn't require engine changes via a DLL, should technically work. The only concern becomes if the mod conflicts with our included assets needed for VR. Some of this is a case of load order. Some conflicts may not be solvable.

There are plenty of options available in the VR Options menu (General / Performance / HUDs). Be sure to check them out.

Performance
We have provided a default config for both the Oculus Quest 1 and Quest 2 optimised for performance.

Please Note: The refresh rate changes instantly when selecting. MSAA and Super Sampling require a restart of the app.

Switching Weapon Hand: Switching dominant hand in game causes issues with constant shooting and flashlight position. Select this prior to starting the game, or reload your save.

Switching Refresh Rates: Refresh rates will take affect as soon as you change the value. Be warned if you select 60hz more than once by looping around the values (60 / 72 / 80 / 90 -> 60) the refresh rate will plummet and likely crash. The 60hz will work fine upon a restart of the app.

HUD Scaling: When changing the size of the HUD, it is anchored to the right hand of the screen. Will be fixed in a future update

PDA Gaze Mode: If you switch away from the default PDA interaction to "Gaze Mode", the very top of the PDA is not selectable. Will be fixed in a future update

Grenades
These are throwable. Hold the trigger and then throw the item, releasing the trigger at the apex of the throw.

Quick Save / Load
As per the other Dr. Beef ports, hold the controller out of the view of the headset and press one of the following buttons to Quick Save or Quick Load

I would like to thank the following teams and individual for making this possible:

Notice of Non-Affiliation and Disclaimers

Doom3Quest is not affiliated, associated, authorized, endorsed by, or in any way officially connected with Bethesda or ID Software, or any of its subsidiaries or its affiliates. Doom3Quest is an unofficial port of the idtech4 engine, which was originally written by ID Software.